This past weekend I ran in a race called the Warrior Dash. This crazy race – billed as a “mud-crawling, fire leaping, extreme run” is a challenging 3.5 mile course filled with obstacles. Obstacles which include barricades to be leaped over and crawled under, tires and trashed cars to be traversed, and “swimming” through water while “leaping” over logs. And mud did I mention mud. That is part of the deal but the rain that morning made sure that there was plenty of it as the entire course was muddy and slippery.

My family and I got to the site early and met up with my brother in law, his family, and one of his coworkers. As it got closer to our start time and we got in line the nervous energy and anticipation was growing. After some good old fashion Brave Heart screams and chants of “bring it on” instigated by the DJ the big flames finally shot out of the top of the starting gate and we are off.

The first mile or so was obstacle free – except for the muddy course so we were able to settle into a runner’s rhythm. We were also excited about getting to the first obstacle. That excitement quickly waned after managing to gut it through that obstacle – which was a series of several alternating items to be traversed – first over a waist-high barrier then crawling under a knee-high cross beam.   I was totally winded. And we had barely started. Then doubt started to creep in and all I could hear was – “Mike, there is no way are you going to make it”. Starved of O2 I quickly caught my breath and started to press on. I had to go catch up with my brother in law. Once we changed our pace a bit we were able to settle in and tackle the next series of obstacles.

One of the later obstacles is a tall wooden barricade that must be climbed. It is probably 10-12 feet tall. And while it has a rope and some wooden studs to help the runner along the way to the top, it is also wet and muddy and therefore slippery. It doesn’t take to long to learn that this obstacle – like most in this event – is best tackled by hitting it hard and not slowing down or stopping once you get started. Even if your muscles are aching and you just want to catch your breath. Because slowing down and stopping reduces momentum and then fatigue and gravity start to really take over. And once that happens it takes a lot more work to get to the top.

Reflecting on the fun (does that make me crazy) of the event later, it became clear why running as an athlete is such a good illustration of living out the Christian life used in Scripture (particularly by Paul). 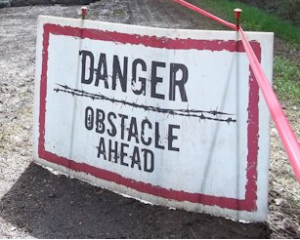 Life is dirty and full of obstacles…

The Christian life lived well takes work just like running well in an event like the Warrior Dash.

When I decided to run this event with my brother in law I knew I had to start training and build into my weekly routine time to run, lift weights, and go to kickboxing class. However training is not easy. It involves hard work, sweat, and aching muscles so after the initial excitement passes the excuses follow (there is plenty of time before the race) as does loss of motivation (I don’t feel like working out tonight) that leads to skipped workouts.  And then there are the other demands (good and bad) on our time. However when one stops training – even for a short amount of time – it is amazing how quick we lose all that hard earned endurance and strength. All readers over 40 know that seems to be at ratio of losing 1 week of gained strength/endurance for each day we take off.  And skipping training makes the goal of surviving the Warrior Dash and getting one of those cool medals that says “I survived” that much harder. So we can pay now or pay more later.

Whether it is slowing down in training or slowing down on that large wall obstacle the result is the same. When we stop we start losing ground – on getting up the wall or getting stronger and fitter. And in life this principle applies with similar results. When we stop moving forward in the Christian life we tend to fall into our natural tendencies. We start loving others less and giving less and then we really start to slip into selfish desires and worldliness starts to take over. There is no effort involved here and we don’t have to think about falling back into them. It just happens because we stopped moving forward.

The idea of continual training, learning, and growing is a repeated theme. The Thessalonian church was noted amongst the churches for their love to others and yet they were told to keep growing in love (1 Thes 4:10). The apostle Peter urged people to increase in qualities such as faith, self-control, endurance, and love so that they would be effective and fruitful Christians (2 Pet 1:8).  And the apostle Paul, echoing themes of running and training, urged all Christians to imitate him. They are to strain forward and press on to the goal of winning the prize just as he does  (Phil 3:12-16). These themes all contain the idea that moving forward is necessary, and it takes work. It also implies that when we stop growing we tend to fall back not remain where we are. Even Paul was worried about being disqualified from earning the prize if he did not train (1 Cor 9:27).

That is why Paul reminds his readers that they are are to “put off the old man” and to “put on the new man” (Col 3:9-10). This was similar to the guidance given to the church in Ephesus (Eph 4:22-24). The verbs used for laying aside and putting on in these passages are in the middle voice. This indicates that we must be an active part of the exchange between the old and the new man. It also indicates that this was not a completed action when we trusted in Christ (Eph 1:13). It requires hard work and dedication.

What are the old man and the new man that Paul refers to?

These men (old and new) that Paul describes are of course not actual people but rather metaphors for our attitudes and practices. The old man is described by Paul as one whose mind is set on the earth and whose attitudes and actions are defined as evil and deserving of God’s wrath (Col 3:2,5-9). The old man is deceived by futile thinking, ignorance, and a hard heart that results in sin and a life apart from God (Eph 4:17-19, 22). The new man is contrasted with the old man and is therefore its opposite.

When we slow down and stop pursuing growth in Christian qualities it is really easy to let ourselves go and find that the “old man clothes” are fit well and are really comfortable.

What practical actions can we do to put on the new man?

First, we must realize that the clothes of the new man are not something that we can create or buy. These clothes are created by God and given to us (Col 3:10; Eph 4:24) when we are in Christ. The old man can only be called a former way of life and be put aside after we have learned the truth in Christ and have received Him (Col 3:7-8, Eph 4:20-22) because it requires a total transformation of who we are from the inside out.

Second, we must establish the right goals to pursue. As this is already long post, I’ll keep this simple – Love God and Love Others.

Third, we must understand that it is a choice that we must make. To take off the old and put on the new. Just like it is a choice to train and prepare for a race and to run with endurance. It is a choice to fight against the sinful desires that will tempt us and hinder us from our goals. Even when don’t want to push on or we lose motivation or we don’t want to get dirty. We must press on. When we don’t want to fight the temptation and just give in. We must fight the good fight. The “putting on” is is not drumming up false feelings and the “taking off” is not getting rid of feelings that exist in us and we wished did not. It is willing to push past them, fight on, and do the right thing.

I do not mean that anyone can decide this moment that he will never feel it anymore. That is not how things happen. I mean that every time it bobs its head up, day after day, year after year, all our lives long, we must hit it on the head. It is hard work, but the attempt is not impossible. – C.S. Lewis (Mere Christianity)

Life is dirty and full of obstacles…

So establish the right goals, stay focused on these goals, don’t quit, and hit each obstacle as it comes.

Oh, and don’t forget to have fun along the way!