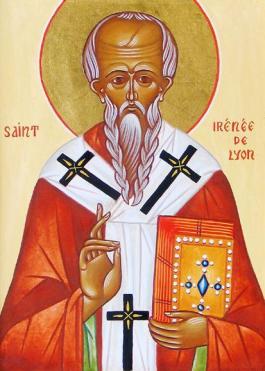 Before looking at what else Irenaeus has to say, let’s take a look at what Charles Spurgeon has to say regarding this topic from his sermon titled “Election“. First he asserts that should one look through the doctrine of the ancients they would struggle to find those who did not hold to his views on election:

Were I a Pelagian, or a believer in the doctrine of free-will, I should have to walk for centuries all alone. Here and there a heretic of no very honourable character might rise up and call me brother. But taking these things to be the standard of my faith, I see the land of the ancients peopled with my brethren—I behold multitudes who confess the same as I do, and acknowledge that this is the religion of God’s own church.

Irenaeus may take offense to being called a heretic. And as we look at the early believers in Jesus Christ we will find that prior to Augustine we are not going to find many confessing as Spurgeon does.

Charles Spurgeon captures the Reformed view on how man can be saved  in his Exposition of the Doctrines of Grace:

I do know that the appointment of God extendeth to all things; but I stand not in this pulpit, nor in any other, to lay the damnation of any man anywhere but upon himself. If he be lost, damnation is all of man; but, if he be saved, still salvation is all of God.

Irenaeus agrees that salvation is totally of God. Man was in need of rescue and only God’s provision was able to save. The gospel according to Irenaeus from the Proof of Apostolic Teaching is that we are saved by faith and not works.

35. … For Abraham believed God, and it was counted unto him for righteousness. In like manner we also are justified by faith in God: for the just shall live by faith. Now not by the law is the promise to Abraham, but by faith: for Abraham was justified by faith: and for a righteous man the law is not made. In like manner we also are justified not by the law, but by faith, which is witnessed to in the law and in the prophets, whom the Word of God presents to us.

and this faith is in the death and resurrection of Jesus:

41. … to those who thus believed in and loved the Lord, and continued in holiness and righteousness and patient endurance, the God of all had promised to grant eternal life by the resurrection of the dead; through Him who died and rose again, Jesus Christ, to whom He has delivered over the kingdom of all existing things, and the rule of quick and dead, and also the judgment.

Irenaeus would also agree that if a person is lost it is because they are a sinner who chose not to accept Jesus as their Lord and Savior. In Against Heresies Book IV.39.3 he writes that

Those persons, therefore, who have apostatized from the light given by the Father, and transgressed the law of liberty, have done so through their own fault, since they have been created free agents, and possessed of power over themselves.

However, while accepting that the provision for salvation was all of God, the actual decision to accept this gift by faith is a choice that man must make. And that is where the two would differ. When we go looking among these ancients for the doctrine of election we are looking for what was articulated by Spurgeon:

“But,” say others, “God elected them on the foresight of their faith.” Now, God gives faith, therefore he could not have elected them on account of faith, which he foresaw. … That would be talking nonsense. In like manner to say that God elected men because he foresaw they would have faith, which is salvation in the germ, would be too absurd for us to listen to for a moment. Faith is the gift of God.

In the Reformed view, a person can not place their faith in Jesus without first being regenerated. This is in contrast to Irenaeus’ views regarding the free will decision made by those who accept Christ (wheat) and those who reject Him (chaff). Writing in Against Heresies Book IV.4.3, we learn:

“For the day of the Lord cometh as a burning furnace, and all sinners shall be stubble, they who do evil things, and the day shall burn them up” (Malachi 4:1). Now, who this Lord is that brings such a day about, John the Baptist points out, when he says of Christ, “He shall baptize you with the Holy Ghost and with fire, having His fan in His hand to cleanse His floor; and He will gather His fruit into the garner, but the chaff He will burn up with unquenchable fire.” For He who makes the chaff and He who makes the wheat are not different persons, but one and the same, who judges them, that is, separates them. But the wheat and the chaff, being inanimate and irrational, have been made such by nature.

But man, being endowed with reason, and in this respect like to God, having been made free in his will, and with power over himself, is himself the cause to himself, that sometimes he becomes wheat, and sometimes chaff.

Pointing to that future day when the Lord will judge all people, Irenaeus points out that it is the same God who judges and saves all people. This was a point of contention as heretics under Marcion claimed one god judged and another god saved (Against Heresies III.25.2,3). He also asserts that God has given to each person a free will so that they are the cause of whether they are wheat (chose to place their faith in Christ) or chaff (chose not to have faith in Christ).

14 thoughts on “Irenaeus On Election and Free Will”