This is the 4th installment of the Adventure of the Elected Man.
You can read the first installment here. 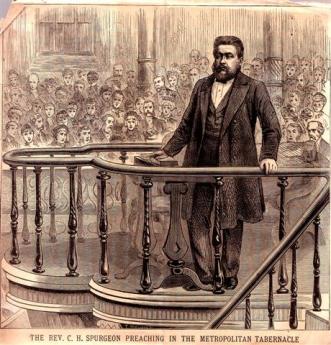 Holmes pressed Spurgeon, “When Jesus said ‘come to Me, all who are weary and heavy-laden, and I will give you rest’ and ‘whosoever will, let him take the water of life freely’ were these invitations open to both the elect and the reprobate? And when we read that God takes no pleasure in the death of anyone but instead desires that all men be saved and to come unto the knowledge of the truth that this desire is expressed so that it includes all of mankind”?

“That Christ is freely presented to every creature under heaven, and that the invitations and exhortations of the gospel are honest and true invitations—not fictions or myths, not tantalisations and mockeries, but realities and facts—I do also unfeignedly believe”, Spurgeon explained.

“Do all Calvinists hold to this?”

“I must confess”, said our guest, “that this is not the case. There are some men that belong to the Ultra-Calvinists that call those of us who teach that it is the duty of man to repent and believe, ‘Mongrel Calvinists’. These hold to the doctrine of election as I have laid before you but they will not preach the whole of the Word of God.”

As Holmes and Spurgeon engaged in conversation I stood, stretched and stirred the fire with the poker eager to see where my friend was going to take this line of questioning.

“If you ever have the opportunity to hear them deny that the gospel is a true and honest invitation to all”, Spurgeon thundered as he leaned forward in his seat and pointed his finger first at Holmes and then to myself. “you give them my most respectful compliments, and ask them whether they ever read Calvin’s works in their lives”.

“My dear Spurgeon!” I blurted out, but was not able to get out any other words.

“Not that I care what Calvin said or did not say; but ask them whether they ever read his works.” Looking up at me he continued. “Then you can tell them, that the man whom they call “a Mongrel Calvinist,” though he has not read them all, has read a very good share of them, and knows their spirit; and he knows that he preaches substantially what Calvin preached—that every doctrine he preaches may be found in Calvin’s Commentaries on some part of Scripture or other.”

Holmes tried to break in. “My interest lies not in what Calvin taught but in how you understand -“

“We are TRUE Calvinists. But Calvin is nobody to us. Jesus Christ and him crucified, and the old fashioned Bible, are my standards.”, Spurgeon bellowed and threw his arms up in the air. “Was God sincere in his offer? God forgive the man that dares to say he was not. God is undoubtedly sincere in every act he did.”

“I see I have touched upon a sore spot, for that I apologize”, Holmes said as calmly as he could. Then offered another cigar to our guest as the first had been finished. Spurgeon readily accepted it and settled down as he cut the end and lit it. He drew deeply and savored the flavors that rolled around his palette.

Holmes continued. “Now, these people whom God has sincerely invited, sought, and entreated to be saved; they are not saved because they would not heed the invitation and come”?

“God declares that He has stretched forth His hands unto a disobedient people all day long, yet they would not have his love; and on their head rests their blood. God says he stretched out his hands. You know what that means. That no one will be responsible for a person’s damnation but themselves, at the last great day. God will not be responsible for it. They will be justly punished because they did not accept the invitation.”

“Now those who hear this invitation are they not the same who are unable to receive eternal life unless they also are given the Divine Cause”?

“Coming to Christ, though described by some people as being the very easiest thing in all the world, is declared to be a thing utterly and entirely impossible to any man, unless the Father shall draw him to Christ. The Scripture says, ‘No man can come to me, except the Father which hath sent me draw him.'”

“Can you describe further this inability of man to come to Christ”?

“The inability of man really does lie deep in his nature. Through the fall, and through our own sin, the nature of man has become so debased, and depraved, and corrupt, that it is impossible for him to come to Christ. He has neither the will nor the power to come to Christ without the assistance of God the Holy Spirit.” Spurgeon shifted in his seat getting more comfortable, then went on. “Coming to Christ is the very first effect of regeneration. No sooner is the soul quickened than it at once discovers its lost estate and flies to Christ and reposes in him.”

Holmes looked up and turned his head toward me and smiled.”We certainly see the worst in man in our profession do we not Watson”.

Then turning to Spurgeon he pressed, “‘whosoever will’ is the invitation yet it is clear that man does not actually have the ability or the will to come. Do you not arrive to the logical conclusion that men are saved against their will thus making them mere puppets -”

“Not bloody likely! Holmes you remind of a man I met once who said to me, ‘Sir, you preach that Christ takes people by the hair of their heads and drags them to himself.’ I told him that while Christ does not drag people to himself, I believe that, he draws them by the heart quite as powerfully.”

“I fail to see your point. If a man is unwilling and unable to respond to the sincere invitation, then how does God not save him against his will, thus in a sense dragging him into eternal life?”

“When the Father draws there is no compulsion whatever; Christ never compelled any man to come to him against his will. If a man be unwilling to be saved, Christ does not save him against his will. He just makes him willing by some mysterious operation. He is able to turn the will in an opposite direction, so that, the man is saved with full consent against his old will”.

“I am used to my friend Watson, who is often too timid in drawing his inferences. And Lestrade who lacks the imagination to see where the data he observes may truly lead. But Spurgeon you go to the other extreme. I would like to help you use your imagination in a more scientific way and balance probabilities choosing the most likely explanation after eliminating the impossible. You must admit it far more likely that this offer is made in conjunction with God’s grace that enables an otherwise unable and unwilling person to freely choose to accept or reject the invitation -”

“Oh, no. It is quite true that first of all man is unwilling to be saved. But when the Holy Spirit hath put his influence into the heart, he draws us, and we are glad to obey the voice which once we had despised. But the gist of the matter lies in the turning of the will. How that is done no flesh knoweth; it is one of those mysteries that is clearly perceived as a fact, but the cause of which no tongue can tell, and no heart can guess.”

[Spurgeon’s remarks are quoted and based on the sermons “Sovereign Grace and Man’s Responsibility“, “Election and Holiness“, and “Human Inability“]