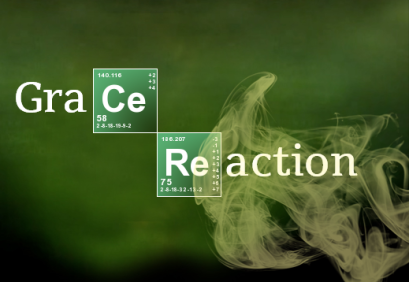 A chemical reaction is a process that transforms the starting substances so that they have properties that are different than those prior to the reaction. These reactions can be graphically represented using a chemical equation.

As an example, methane and oxygen after the chemical reaction of combustion produces carbon dioxide and water. This is represented by the following equation:

The arrow in that equation represents numerous steps that occur before we end up with our two final products.

Can you tell that school has started?

Interesting, but you might be wondering what this has to do with theology? Recently, I have been thinking through salvation, particularly on the sequence of events that allow a sinner condemned to death to experience reconciliation and new life. The more I thought on this, the more I started to see it as the Grace Reaction. Of course in theology this concept is more commonly known as the ordo salutis.

Like a chemical reaction we start with a reactant, in this case that would be a person. As individuals we start off in a certain state. The Scriptures paint a rather dire picture of that state. We are enemies of God who are dead and under condemnation.

The great news is that even in this state God still loves us. He provides Grace as a reagent to initiate a process that allows us to become new creations that are reconciled to God. As a chemical equation that might look like this:

One of the great truths of Scripture is it is by grace you are saved (Ephesians 2:5,8; Acts 15:11). If God didn’t act and provide Grace we would all perish. This grace that saves refers primarily to God sending a Hero that would be able to rescue us. That Hero was Jesus who came to deal with our sin and unrighteousness on the cross. Because the debt of our sins was cancelled on the cross Jesus could offer this gracious promise to transform us in John 5:24:

whoever hears my word and believes him who sent me has eternal life. He does not come into judgment, but has passed from death to life.

This is what it means to be saved by grace. God loved us and offered us an opportunity to receive the gift of cancelled debt, acquittal of our sins, and new life. We don’t deserve it and we can’t do anything to save ourselves. We can only accept or reject this gift.

There is another way that grace is involved in salvation. Like convicted criminals we are dead men walking. But God not only provides Jesus as the gracious provision for our sins. He also gives us prevenient grace. This is grace that is given to us prior to our being saved. It is this grace that is the reagent that kicks off the Grace Reaction and has the potential to transform us.

What prevenient grace does and the steps involved in going from being dead to alive once that grace is applied differs depending on the theological system one holds.

In the Reformed view, the prevenient grace that starts things off is efficacious and irresistible. The reagent begins a chain reaction that looks like this:

Most theologians don’t like to talk of these steps as being in a temporal order. However, it should be noted that these steps must be considered in their logical order because of the cause → effect relationship that exists between each step.

There are several important terms that occur in this reaction. Let’s take a moment to define two of these: regeneration and justification.

Regeneration is the moment when God imparts new spiritual life to us. This is often referred to as being born again (see Grudem for more details).

John Calvin (III.11.2) defined justification as “the acceptance with which God receives us into his favor as righteous men. [It] consists in the remission of sins and the imputation of Christ’s righteousness.” J.I. Packer defines it as “a judicial act of God pardoning sinners”. And John Wesley (Sermon 5) offers “the plain scriptural notion of justification is pardon, the forgiveness of sins.”

The reason the Reformed hypothesis states that salvation must start with regeneration is two fold. First, a dead person can’t respond with faith. They must be made alive so that they are able to respond in faith. Second, is the understanding that God in His sovereignty initiates salvation (monergism) by providing the necessary and irresistible grace that saves a person. Neither salvation, nor God’s will to save, is dependent on a person’s choice to accept or reject God or the work of His Son.

Given these definitions, which I am in agreement with, I started walking through the steps in this process. As I did the question that kept turning over in my head was this. Is it possible for someone to be regenerated prior to being forgiven of their sins? If the “certificate of debt” is still held against us, because we have not yet been justified, then on what basis does God impart new life through regeneration? If we are dead in our transgressions, then wouldn’t we be alive in our transgressions after being regenerated but before being justified?

if you like the Breaking Bad style images then check out this generator site.

3 thoughts on “The Grace Reaction”