In his essay on predestination, appearing in Grace for All, I. Howard Marshall compared divine determinism (see this post) to an author writing a script. A concept that was explored in this post using the Star Wars movies (link). At the end of the post, I asked readers, both proponents and opponents of meticulous sovereignty, if they thought Marshall’s analogy is accurate? A member of the Reformed Pub Facebook group affirmed the analogy was useful for understanding the idea, pointing me to a paper by Dr. James N. Anderson. Anderson (blog) is the Associate Professor of Theology and Philosophy (link) at Reformed Theological Seminary.

The article is entitled “Calvinism and the First Sin”, (available for download until it is published) and it explains the Reformed view of divine determinism and its relationship to theodicy (why God permits evil). It also compares it to other views (Molinism, Simple Foreknowledge, and Open Theism), before advocating it as the best option. A conclusion I would not agree with. 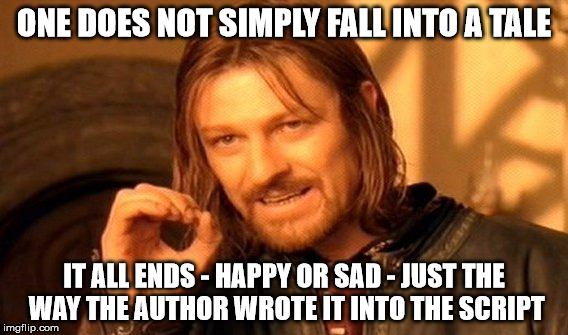 A far more fitting model would be what we might call the Authorial Model of Providence. On this way of thinking God’s acts of creation and providence are analogized to the human authoring of a novel. At the ultimate level, the author determines everything that takes place in his novel. He creates a world and he populates it with characters. Indeed, he creates the characters—in a relative sense, he brings them into existence. He bestows them with certain personalities and causal powers (which need not correspond to the causal powers in his own world—think fantasy and sci-fi genres). The author sets up the circumstances in which the characters live and play out their roles in the overarching storyline. Some of the characters may commit morally objectionable, even wicked actions—actions which the author himself disapproves, but which are necessary for the sake of the story and its outcome. Tolkien presumably did not morally approve of Gollum’s actions in The Lord of the Rings, but the novels would hardly have been the same without Gollum and his schemes.   …  We might say then that the author of the novel has ordained that sinful actions take place within the world he has created, but the author himself does not thereby commit any sinful actions or imply his approval of them. In a broad sense, the novelist is the first and ultimate sufficient cause of everything that takes place in his creation. Yet at the same time, this authorial causation operates on a very different level than the intranarrative causes. An Oxford don does not appear in Middle Earth and place the One Ring on Sméagol’s finger.  …

No doubt the Authorial Model has its limitations and invites some objections. I suggest nonetheless that it is an appealing and potentially fruitful way for Calvinists to model their commitment to divine determinism and what it entails regarding divine causation.

With both Arminian and Calvinist theologians accepting the author/script analogy as an accurate illustration of divine determinism, it gives everyone a common way of picturing and understanding this complex topic. This will hopefully allow good discussion on this topic in the future.