While Paul was in prison in Rome he wrote a letter to the church at Colossae. In the letter he is urging the church to reject false philosophies and points to why we need Jesus. In verses 1:21-23 he presents us with a conditional statement that could be written out as follows: 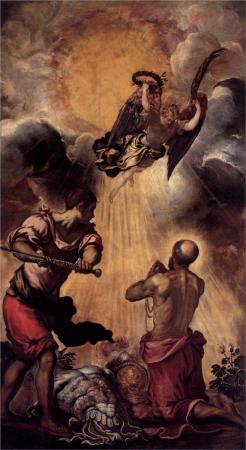 The Martyrdom of Paul

In a conditional statement, like the one here, the if-clause is known as the protasis and the then-clause is called the apodosis. The apodosis can often be expressed as a statement that can stand independent of the protasis. Read Colossians 1:21-22 as if it had a period at the end of verse 22 and you see that this is a complete thought. It can stand on its own. However, the occurrence of an if-clause, like the one we have in 1:23, attaches a condition to this otherwise independent statement.

What Conditional Class do we have in Colossians 1:23?

Our verb in the protais (ἐπιμένετε) is present active indicative and means to remain, persist, continue.

For Colossians that would yield:

Paul is writing to encourage the Colossians to have enduring faith, rather than adopt the false philosophies that are creeping into the church. He reminds his readers that enduring faith and reconciliation (ie salvation) are linked together. However there is a degree of uncertainty as to whether individual people in the church are actually saved or not. Paul is not there, and has likely never met them. So he assumes for the sake of argument that they are saved and therefore encourages them to stand firm.

What is the relationship between the protasis and apodosis?

There are primarily two ways that the protasis and the apodosis can be related to each other. The relationship expressed here is independent of the conditional class that was used to form the statement.

The relationship between the protasis (enduring faith) and the apodosis (reconciliation, being saved) can be expressed as a “cause-effect” such that the protasis is the cause of apodosis. In our Colossians passage we could interpret the statement to mean:

Enduring faith is the effective cause of our being reconciled.

Another possible relationship between the protasis (enduring faith) and the apodosis (reconciliation, being saved) is understanding them in terms of evidence and inference. The protasis is the evidence that allows us to infer the apodosis is true. In our Colossians passage we could interpret the statement to mean:

We can infer that we are reconciled when we have the evidence of enduring faith.

Given the two options, I prefer the second (evidence-inference) because I see grace and Christ’s death as the cause of being reconciled. Faith is the agency by which we receive God’s grace and are reconciled. This view also moves the emphasis from teaching objective eternal security to assurance and the evidence by which we might know we are saved (and thus be eternally secure), which I think is Paul’s point.

Do we need enduring faith?

This interpretation of Colossians is contra the “Free Grace” teaching of Charles Stanley and others. Stanley argues that we do not need enduring faith in his book Eternal Security (page 77-78):

… God does not require a constant attitude of faith in order to be saved – only an act of faith. …

Forgiveness or salvation is applied at the moment of faith. It is not the same thing as faith. And its permanence is not contingent upon the permanence of one’s faith.

Christ will not deny an unbelieving Christian his or her salvation because to do so would be to deny Himself.

Notice here the term – “unbelieving Christian”. According to Stanley a person who denies that Jesus is the Messiah and that His death and resurrection are the basis by which we are saved – is still saved. All they needed to have done is accept Christ through an act of faith at some point in time.

… believers, who lose or abandon their faith will retain their salvation, for God remains faithful.

It is true that in a single moment in time we are saved when we express faith in the Lord. However, Colossians teaches us that saving faith is enduring faith.

We can be sure that we are reconciled because we can ask whether we have faith in Christ. This side of eternity, we can only be sure that we are eternally saved if we have faith in Christ at the moment that we are asking the question. When someone asks – am I saved – and at that moment faith is absent and the person is denying Christ then there is no evidence or reason to believe that they are saved regardless of some past decision.

The passage in Colossians teaches the necessity of enduring faith in determining one’s eternal destiny. Without enduring faith there is no evidence and therefore no reason for accepting that one is reconciled. However, enduring faith does not necessarily deny eternal security or mean one can lose their salvation. It is possible to conclude that they were never saved in the first place.