Dawkins at the University of Texas at Austin

What is faith? Many define faith as “blind trust” or irrational beliefs:

[Faith] means blind trust, in the absence of evidence, even in the teeth of evidence. … The meme for blind faith secures its own perpetuation by the simple unconscious expedient of discouraging rational inquiry. Blind faith can justify anything. (Dawkins, the Selfish Gene, 198)

Faith is the great cop-out, the great excuse to evade the need to think and evaluate evidence. Faith is belief in spite of, even perhaps because of, the lack of evidence (Dawkins)

Is faith really blind? Does faith require us to give up rational thinking? I don’t think this is the case. I believe that the Scriptures encourage us to investigate facts and provide reasons for our faith (1 Pet 3:15). The problem is most people will not trust God no matter how much evidence they are given. Consider two responses to Jesus on the cross in the Gospel of Mark.

After a mock trial in which no criminal charges or corroborating witnesses could be found and no wrong could be named (14:55-63; 15:12-14) Jesus was charged with being the King of the Jews (the one charge that is true). He was crucified Friday morning at around 9am. After 3 hours on the cross darkness came in the middle of the day and 3 hours after that, at 3 pm Jesus died. On that day there were several different groups of individuals that witnessed the event and responded. We will look at two groups – the crowd and the centurion.

The crowd (Mark 15:29-37)
The religious leaders, the crowd, and the thieves are all witnesses to Jesus’ crucifixion. As Jesus hung on the cross they came and spit on him, mocked him, and ridiculed Him. They challenged Jesus to prove that He was the Messiah.

This group were asking for more evidence so that they could “see and believe” (Mk 15:32). They were not going to accept blind faith, they wanted proof! However their a priori convictions (the Messiah would come as King and reunite Israel) and their derisive attitude demonstrate that they were not making an honest inquiry. In fact this group had already been given many signs. The religious leaders had seen Jesus’ miracles (Mk 2:1-3:6) and rejecting them declaring they were from Satan (Mk 3:22). The crowd had also witnessed many signs including many healings, exorcisms, and the feeding of 5000 (Mk 6:33-34). Refusing to believe “even in the teeth of evidence” they demanded even more signs (Mk 8:11-13).

The centurion (Mark 15:39)
The antagonists were hostile and demanded proof from Jesus.  The centurion however started off that Friday just doing his job. He had to oversee the scourging and crucifixion of three people that day. It was his responsibility to make sure that all three condemned men actually died (Mk 15:44-45). Jesus was just another convict that had to die. But that was not how the day ended.

Now when the centurion, who stood in front of him, saw how he died, he said, “Truly this man was God’s Son!”

The centurion did not demand signs but he did observe what God chose to reveal that day, evaluated the evidence, and accepted that as testimony that Jesus was the Son of God. 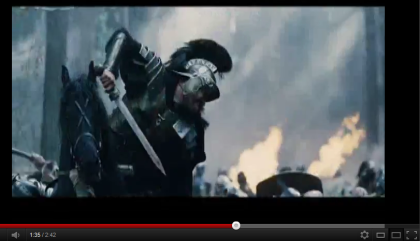 What did the centurion see that convinced him?
As a Roman soldier he would not have much background in the teaching of the Scriptures. He may or may not have heard of Jesus’ ministry and miracles and he may or may not have even witnessed Jesus’ trial. We can say with certainly that he saw the darkness in the middle of the day and would have heard all of the things that Jesus did and said while on the cross – though Mark records almost none of them.

All these likely contributed to his faith that day. But the text says that what convinced Him as he stood in front of Jesus was how Jesus died. Most crucified victims took long hours and days to die on the cross (that is why the thieves legs had to be broken and Pilate is surprised how quickly Jesus died) but there must have been something else that was different in how Jesus died. Something besides His quick death that caught the attention of a man who had witnessed many deaths on the cross. He had heard the curses and insults that men in pain screamed at him and contrasted that with Jesus looking over at him and saying “I forgive you”. He saw men struggle to breathe and hold on to life until they collapsed. But that day he saw Jesus give His life. He realized that when Jesus died it was His giving not the cross taking His life.

What ever convinced the centurion that day, he left that day convinced that Jesus was the Son of God. Would that have been enough evidence for you? While we are told walk by faith and not by sight (2 Cor 5:7), we must remember that God does not expect blind faith but honest seekers that investigate the evidence that God does provide and think it through. That is what the centurion did that day.

Modified from original posting on February 2, 2010