Augustine (354-430) is considered one of the most influential Christian theologians and philosophers. In the Parchment and Pen Top 10 theologian series, he was 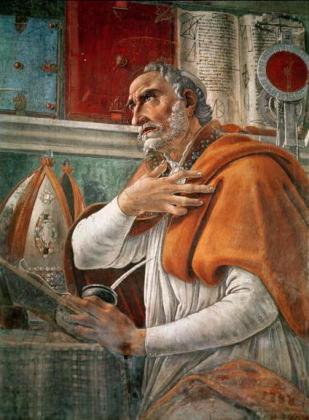 As a young man, Augustine studied rhetoric. During his studies he began his search for truth. That search led him to a group known as the Manichees, which held to a Gnostic dualism. In this system good and evil were two separate and opposing powers.

In 387, while teaching as a professor of rhetoric in Milan, Augustine became a Christian (largely due to the influence of Ambrose). Eventually he would go on to become the Bishop of Hippo (in North Africa).

As a Christian, Augustine wrote many works against Manichaeism in an attempt to help his friends understand the problems with that view and encourage them to become Christians.

In refuting the dualism of Manichaeism, Augustine explained that God was the Good Creator of all things and all that He created was also good. Evil was not a separate and opposing power (as they taught) but rather the absence of good. Man and the poor use of his free will was responsible for evil when he chose to sin.

Early Definitions of Free Will and Salvation

In his book, On the Two Souls (written in 392 AD against Manichaeism), Augustine defined the will:

[the] will is a movement of mind, no one compelling, either for not losing or for obtaining something. …

At this point in time Augustine’s view of man’s will contains within it the ability to “choose otherwise”. For Augustine this definition of the will was so obvious that it ‘promptly occurs to all not by instruction but by nature’.

For Augustine the responsibility for our actions is rooted in being able to choose to do them or not to do them.

Wherefore whatever these souls do, if they do it by nature not by will, that is, if they are wanting in a movement of mind free both for doing and not doing, if finally no power of abstaining from their work is conceded to them; we cannot hold that the sin is theirs. (chapter 12)

In making his point, Augustine asks if a man is forced to write something sinful by the hand of another while he is asleep is he guilty of the action. The response is a resounding no! The man was compelled to sin. He did not will to write the sinful words and can’t be held responsible.

Several years later, in the book On The Spirit and The Letter (written in 412), Augustine describes a synergistic view of salvation in which God imparts a preventing (that which occurs prior) grace but man still has a will that is free to choose or reject Him.

Since God, therefore, in such ways acts upon the reasonable soul in order that it may believe in Him (and certainly there is no ability whatever in free will to believe, unless there be persuasion or summons towards some one in whom to believe), it surely follows that it is God who both works in man the willing to believe, and in all things prevents us with His mercy. To yield our consent, indeed, to God’s summons, or to withhold it, is (as I have said) the function of our own will. … For the soul cannot receive and possess these gifts, which are here referred to, except by yielding its consent. (chapter 60)

Augustine’s understanding of free will and responsibility seem to align with the opinions of those in the early church (see the Series on Free Will).

Later views on Free Will and Salvation

However, Augustine would come to understand these concepts very differently as he studied the Scriptures and wrestled with various issues over the years. He eventually adopted a monergistic view of salvation and is considered by many to be the first theologian to articulate this idea.

In his book, On the Predestination of the Saints, written in 426, Augustine describes the doctrine of unconditional election and irresistible grace, in which God changes the will of man so that they believe and are saved.

We see that many come to the Son because we see that many believe in Christ, but when and how they have heard this from the Father, and have learned, we see not. It is true that that grace is exceedingly secret, but who doubts that it is grace? This grace, therefore, which is hiddenly bestowed in human hearts by the Divine gift, is rejected by no hard heart, because it is given for the sake of first taking away the hardness of the heart. When, therefore, the Father is heard within, and teaches, so that a man comes to the Son, He takes away the heart of stone and gives a heart of flesh (chapter 13)

Away, then, with the thought that any one comes not, who has heard of the Father and has learned. (chapter 14)

Faith, then, as well in its beginning as in its completion, is God’s gift; and let no one have any doubt whatever, unless he desires to resist the plainest sacred writings, that this gift is given to some, while to some it is not given. (chapter 16)

But why He delivers one rather than another—”His judgments are unsearchable, and His ways past finding out.” For it is better in this case for us to hear or to say, “O man, who are you that repliest against God?” than to dare to speak as if we could know what He has chosen to be kept secret.  (chapter 16)

1 thought on “Augustine’s Evolving Views on Free Will”