Is saving faith the “act of a moment” or is it instead an attitude of a lifetime? That is the question that noted Arminian Steve Witzki tackles in his essay in Grace for All. Witzki relies on Robert Shank’s work Life in the Son, which presents a Classical Arminian view of eternal security.

There are three primary yet different views on eternal security and apostasy (see this link). In this essay, Wtizki presents these views under the headings the Moderate Calvinist view, the Classical Arminian view, and the Reformed Calvinist view.

The Moderate Calvinist view (as well as the Free Grace Movement) hold that a true believer can fall away from the faith (commit apostasy) and still be saved (possess eternal life).  The latter two views both hold that an enduring faith is required to be saved. An apostate would not possess eternal life. The Classical Arminian view is that an apostate has forfeited their salvation. The Reformed Calvinist view holds that the apostate was not ever really saved.

However, Witzki doesn’t focus on the differences between the latter two views noting that they are very similar. Instead, the essay targets the flaws in the Moderate Calvinist view (including Joseph Dillow and Charles Stanley).

Many believe that saving faith is the act of a moment – … They believe that one grand and holy moment of decision ushers one into an irrevocable state of grace in which he is unconditionally secure.

are persuaded that saving faith is not the act of a moment, but the attitude of a life; the initial decision must be perpetually implemented throughout the life of the believer

The question presented in Shank’s book and quoted in Witzki’s essay contrasts these two views asking who is right?

After presenting the three views using quotes from those that hold to them, Witzki presents the Scripture as he asks: 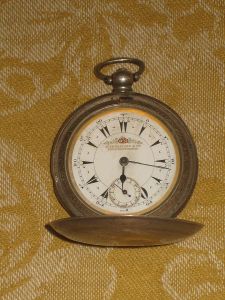 What is the source of eternal life?

Here is his part of his translation of 1 John 5:10-13, the emphasis is in the original.

Eternal life is for those that are in Christ.

What is the condition for possessing eternal life in Christ?

Presenting quotes from numerous commentaries on John 3:16 (see also this link), including Calvinist Alan Stanley, the following point (emphasis in original) is made:

in keeping with the Greek present tense and John’s theology, John 3:16 in fact means, “For God so loved the world that he gave his one and only Son, that whoever continues to believe in him shall not perish but have eternal life.

The emphasis lost in most English translations is on a continuing action.

Witzki makes an interesting observation on John 3:18 (here quoted from the NET)

The one who believes in him is not condemned. The one who does not believe has been condemned already, because he has not believed in the name of the one and only Son of God.

The verbs (shown in bold) in this passage are both Greek present participles (see link). Thus, arguing for consistency in translating the verbs, Witzki notes:

This of course doesn’t make sense. A better translation is:

Shank (and Witzki) conclude that enduring faith is a condition of salvation. Or put another way that a characteristic of a faith that is genuine is perseverance.

The New Testament affirms that eternal life in Christ is our present possession only on the condition of a present living faith, rather than as the irrevocable consequence of a moment’s act of faith sometime in the past.

1 thought on “Grace for All: Is Faith just a Moment in Time Decision?”