Faith, we all know that without it we can’t please God, nor can we have eternal life. It is through faith that we are placed in Christ and it is in Him that we receive every spiritual blessing. But have you ever stopped to think about how you would describe faith?

Would you describe faith as a gift? Something that is given to you by God. Or would you understand it as an act in which you expressed your trust in God, convinced that He will fulfill all of His promises?

Most theologians that hold to Calvinism would choose to portray faith as a gift. This article (link) posted at Ligonier Ministries asserts:

Grace and faith are divine gifts, and our Father does not give them to all people.

Grace to You, the ministry of John MacArthur, (link) and John Piper of Desiring God (link) assert the same thing – faith is a gift that God gives to people.

However, the description of faith as a gift is not limited to Calvinist theologians. Even, John Wesley, the Methodist preacher, called faith a gift in his sermon “Salvation by Faith” (link).

“For by grace are ye saved through faith; and that not of yourselves.” Of yourselves cometh neither your faith nor your salvation: “it is the gift of God;” the free, undeserved gift; the faith through which ye are saved, as well as the salvation which he of his own good pleasure, his mere favour, annexes thereto. That ye believe, is one instance of his grace; that believing ye are saved, another.

Why do some theologians represent faith as a gift?

Most theologians that describe faith as a gift want to emphasize that salvation is not based on any works that a person can perform (Eph 2:8-9).  By calling faith a gift they seek to eliminate any reason that a person might have to boast in anything but Christ (1 Cor 1:30-31; 2 Cor 10:17).

Faith is a gift from God, so that no one may boast.

Expanding on this idea, he notes that because faith is a gift “every possible ground of boasting is taken away. How can we boast if even the qualification for receiving gifts is also a gift?”

R.C. Sproul notes that “faith is ultimately a gift of God” and concludes that “if we believe that we are capable of working up faith in our souls, we cannot boast in Christ alone.”

What do theologians mean when they say faith is a gift?

Even if theologians describe faith as a gift, there is a difference in what they mean to convey. While beyond the intent of this post, Calvinist theologians hold that faith is the effect of regeneration (see here and here for more details). Not only must God enable a person to respond in faith, but this enablement (known as irresistible grace, efficacious grace, and regeneration) when provided has faith as its only outcome.

We can say, first, that regeneration is the cause of faith. … Having been born of God results in our believing. Our believing is the immediate evidence of God’s begetting.

In What is Reformed Theology?, Sproul explains that faith is something that is placed into a believer by God.

Reformed theology teaches that faith itself is a gift given to the elect. God himself creates the faith in the believer’s heart. God fulfills the necessary condition for salvation, and he does so without condition.

Wesley had a different idea in mind. Thomas Oden captures the intent of Wesley when he explains, in John Wesley’s Teachings, Volume 2, that faith is not something that we can initiate on our own.

The sinner is at liberty to resist grace but not to initiate grace.

… When Paul says to “work out your own salvation,” he does not imply that one may work without the preparatory grace of God, but rather only with it. Yet the coworking design of grace asks for our responsive willing, through which it is God who is working concurrently in us to will and do God’s own good pleasure.

God must give us the gift of enabling grace, for without it a person could not have faith.In this sense it could be said that faith is a gift. However, a key difference between Wesley and those who ascribe to Calvinism, is that God is not creating faith for a person, nor is regeneration its cause. For Wesley, a person must cooperate with the gift of enablement. Once enabled they are free to choose to either accept (believe) or reject (remain in unbelief) the gift of salvation.

How does Scripture present faith?

Scripture makes it clear that salvation and the many spiritual blessings offered to us are gifts.

However, Anthony Hoekema, a Reformed theologian, writing in Saved By Grace, notes that

It is hard to find specific biblical texts teaching that faith is the gift of God.

While noting that no texts explicitly teach us that saving faith is a gift, Hoekema continues

The fact that we are completely dependent on God for our salvation as well as for everything else certainly implies that we cannot have true faith unless God enables us to do so.

He goes on to present several passages that are often used to defend the idea that faith is a gift, including the “go to” passage Ephesians 2:8-9.

An article on Bible.org (link) summarizes some of the contention over the grammar in this passage and what it conveys.

After saying that we have been saved by grace through faith, Paul adds, “and that not of yourselves….” There is debate about what “that” refers to. In Greek it is neuter, whereas both “saved” and “faith” are feminine. Grammatically, it is possible that it refers to faith … But Calvin and most modern expositors argue that “that” refers to the entire process of salvation by grace through faith.

Hoekema agreeing that “that” refers to the entire process of salvation notes that “since faith is included, one could say that this passage teaches indirectly that faith is the gift of God.” Some Arminians would agree, in addition to John Wesley,  Grant R. Osborne affirms faith is a gift. In Grace for All, he deals with the passage in Ephesians and asserts that “Salvation is the cover term which has two aspects – God’s grace and man’s faith. All come within the category of ‘gift.'”

I would agree with the observation that “that” does not refer back to faith, but rather to the whole of salvation. But would lean toward the view presented by J. Vernon McGee, in his commentary on Ephesians, when he notes that:

Paul is not talking about faith when he says, “And that not of yourselves.” He is talking about salvation. Salvation is a gift that eliminates boasting.

The primary reason I would not see faith as a gift is that faith is a verb and is grammatically performed by people.

Using Bible Works to do some analysis, the verb for faith occurs 241 times in 217 verses in the New Testament (list available here with parsing). Of those, it is in the active voice 232 times. Faith appears only 9 times in the passive voice. 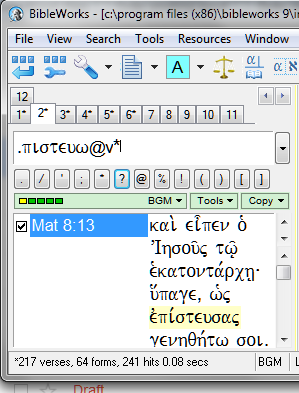 By way of example, here is how the idea of reading this post would be presented in both the active and passive voice.

The evidence is clear that the New Testament has no problem portraying faith as an action that is performed by a person.

What about those cases where faith is passive? I will note two examples where

There are two passages that specifically describe faith as a gift. These are found in Romans 12:6 and 1 Corinthians 12:9. However, these both appear in the context of spiritual gifts and few commentators understand these as referring to saving faith.

John Gill’s commentary on 1 Cor. 12:9 understands this gift of faith as follows (link):

[this is] not the grace of faith, which is common to all believers, though given by the same Spirit: but rather the doctrine of faith, and ability to preach it, and boldness and intrepidity of spirit to assert and defend it in the face of all opposition

In his Explanatory Notes (link),John Wesley sees the faith in the Corinthian passage as likely meaning “an extraordinary trust in God under the most difficult or dangerous circumstances.”

If faith is an action performed by people doesn’t that mean we can exalt the part we play in our salvation?

May it never be. Faith is presented in Scripture as being an act performed by people. But it is also noted as being contrary to works and in accord with grace (Romans 4:5; 11:6). When a person believes they are not earning salvation nor are they saving themselves. They are meeting the one condition God presents to all who would receive the gift of salvation.

This story does an excellent job of illustrating the idea that faith is a wise decision to accept a gift. It is not a work, nor is it something that should cause one to boast in themselves.

picture yourself as a poor unskilled laborer who barely can scrape enough together to feed your wife and three children. One day you get in the mail a letter from a famous wealthy philanthropist. The letter says that if you will bring it to his lawyer, the lawyer will pay you a hundred thousand dollars—no strings attached. The reason he gives is simply that he enjoys giving to the poor.

… You need only go pick up the money with the letter. So you follow his instructions and go. Entering the lawyer’s office, you hand him the letter. He says he has been expecting you, writes the check and bids you farewell.

Faith is symbolized by the response of the poor man. … No use of the terms “merit” or “deserve” in our ordinary experience would justify the [poor man’s] saying to the [philanthropist], “I deserve (or merit) [wealth] because I brought you this letter.” …

The [poor man] may say one thing: “[a] merciful [philanthropist] has sent me a letter … and I believe that his faithfulness to his word and his commitment to his own honor is so great that … he will certainly do what he has said.”

Would it surprise you to know that the author of this illustration is John Piper (link).

Consider also the parable presented in Luke 18:9-14. This parable contrasts the Pharisee who boasts in their works with the humble tax collector begging for mercy. Jesus explains that it is the tax collector who “went down to his home justified.” How, foolish would it be for the tax collector to turn around and boast about his humility and faith rather than in God’s goodness.

While it may not be completely inaccurate to call faith a gift, the phrase leads to more confusion than clarity. Faith is not a gift, it is the qualification for receiving the numerous gifts (salvation, justification, eternal life etc) that God offers. It is a person’s grace enabled response to the Gospel and a decision of the will in which a person entrusts oneself to God and His promises.

Faith is not something to boast in. But rather it is the starting point from which we proclaim thanks be to God for his indescribable gift of salvation in Christ!