Some of the earliest extant writings of the church, after the apostles, were written by Ignatius of Antioch. Unfortunately very little is known about him. At least not with much certainty.

We can, with reasonable confidence, know that he lived in the first and second centuries during the reign of Trajan (98-117). This is based on the following set of evidence:

Martyrdom for the Faith

Ignatius is remembered for his courage as he faced martyrdom for his faith in Christ, sometime between 105 and 115 AD. He was arrested, taken into military custody, and taken from Syria across Asia Minor to Rome. In Rome he would be executed, being torn apart by wild beasts. It is on this journey that he wrote the letters that we have in our possession today.

It is reasonable to conclude, even from the earliest evidences, that Ignatius was among those who suffered and died for his faith.  This can be based on the extant letters, in which Ignatius expects to die in Rome, as well as both Polycarp and Irenaeus mentioning him (or at least his letter) in the context of encouraging Christians to model those who have suffered for Christ. 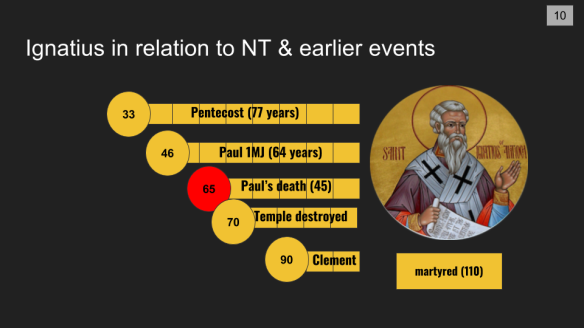 Eusebius, a fourth century historian, correctly describes the situation for Christians during the time of Trajan .

although no great persecutions took place, local persecutions were nevertheless going on in particular provinces and many of the faithful endured martyrdom in various forms. (Ecc Hist III.33)

It is unclear why Ignatius was targeted for his faith and sentenced to death, as he was visited by many Christians along his journey to Rome.

What did he write?

Ignatius’ letters, as noted, were written while he was being taken across Asia Minor to Rome. There is some debate as to how many letters he has written and whether the form we have them in today represents what he wrote.

And as he made the journey through Asia under the strictest military surveillance, he fortified the parishes in the various cities where he stopped by oral homilies and exhortations, and warned them above all to be especially on their guard against the heresies that were then beginning to prevail, and exhorted them to hold fast to the tradition of the apostles.  (Ecc Hist III.36)

According to Eusebius, Ignatius wrote seven letters, four from Smyrna and three from Troas.

In their shorter format, these seven letters are considered by most scholars to be genuine, written by Ignatius but containing some later interpolations.  Any additional letters attributed to Ignatius, along with the longer form of the seven letters are generally assumed to have been written during the fourth century.

Celebrated Hero during the Fourth Century

During the fourth century, Ignatius is fondly remembered as a hero of the faith. The  more detailed information we have regarding him is dated around this time. However, much of this information is debated as to its authenticity.

Instructed by the Apostles?

Many assume that Ignatius was a student of the apostles, particularly John. This is based on his association with Polycarp, a relationship affirmed because Ignatius wrote to him. The connection between Polycarp and the apostles are based on two excerpts from Irenaeus (writing around 180).

But Polycarp also was not only instructed by apostles, and conversed with many who had seen Christ, but was also, by apostles in Asia, appointed bishop of the Church in Smyrna, whom I also saw in my early youth, for he tarried [on earth] a very long time… (Ad Haer III.3.4)

And these things are borne witness to in writing by Papias, the hearer of John, and a companion of Polycarp… (Ad Haer V.33.4)

It is only later that we have more clear testimony that Ignatius, himself was instructed by the apostles, being appointed to his post as bishop by either Peter or Paul. But the information here is rather late and conflicting.

Paul was a noted member of the church and it was the leaders of Antioch that sent him out on his first missionary journey (Acts 13:1-3). This was around 46-47 AD.  Both Peter and Paul are both in Antioch (Gal 2:11-13), probably after the 1MJ and around the time of the Jerusalem Council. The general date given for Peter and Paul’s martyrdom is dated around 65 AD.  Ignatius meets a similar fate 40-50 years later.

If Ignatius was instructed by the apostles, particularly Peter and Paul, and appointed to his role as bishop by them, then this would presumably be around 40-50 AD. That would be around 60 years before his death, making him quite an old man, probably over 80 when he died. While possible, it is far more likely that he was a young boy at the time Peter and Paul were in Antioch, and he was probably not appointed to the role of bishop by them.

[1] Paul Gilliam III, Ignatius of Antioch and the Arian Controversy, 110