C. Matthew McMahon of A Puritan’s Mind on Justin Martyr

Another author, C. Matthew McMahon, makes it quite clear that any article or post suggesting that the early church did not hold to the Reformed doctrines of grace prior to Augustine is “terrible”.

There are a number of websites (some quite terrible, others a bit scholarly, yet equally terrible) that attempt to dissuade investigative readers to believe that, except for Augustine, or at least until the “time of Augustine”, that the early church did not believe in the depravity of man, in unconditional election and/or a sovereign predestination, a limited atonement in extent of Jesus Christ, grace that is irresistible, and the final perseverance of the saints. This is a tragedy.

While this multi-part post might be considered “terrible”, it is certainly not discouraging readers from investigating this matter further. In fact I hope readers will be inspired by this post to go and read the early church documents for themselves and wrestle with what is written in their full and proper context. It is one of the reasons citations and links are amply provided.

In the post “Did the Early Church Believe the Doctrines of Grace?” (link), McMahon answers the question posed in the title with a strong affirmation that they did.

He goes on to provide an extensive, and in his words, non-exhaustive list of quotes in which the Reformed teachings “can be found quite specifically.” Again I will focus on those quotes attempting to show Justin Martyr as a proto-Calvinist. 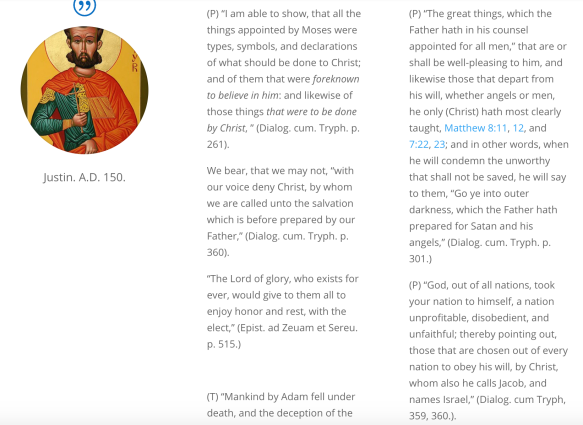 This site is an improvement over Horton’s list as it provides citations to the early church quotes it uses. However, McMahon does not provide the chapter within the historical work cited. Instead he uses pages numbers from an edition or volume from which these are taken that is not identified.

In reading through these quotes, I would challenge the reader to look at what is really being written and then go and read them in context. Doing this one will find that most of the excerpts are ambiguous, relying on Calvinistic presuppositions and understandings of what a word means rather than a detailed exploration of what the author meant by the quote or term.

Let’s examine the first quote McMahon offers suggesting that Justin accepted unconditional election. It comes from chapter 42 of the Dialogue with Trypho.

I am not sure why one would see this as teaching unconditional election. Given that the author italicized “those who it was foreknown were to believe in Him”, we can assume that this is were we should focus our attention. However, all this passage specifically says is that God foreknows who was going to believe in Christ. It says nothing about how God foreknew this. It could readily be interpreted as conditional election, in which God elects those He foresaw (and thus foreknew) would accept the Gospel and endure in their faith.

Calling Justin a proto-Calvinist based on this quote would require coming to the text with a presupposition of what foreknowledge is and how God acquires it. Adding to what Calvin wrote (see prior post), Millard Erickson, in Christian Theology 2nd Edition, explains how a Reformed reader understands foreknowledge.

[God] foreknows what will happen because he has decided what is to happen [ie decreed/ordained]. This is true with respect to all … human decisions and actions … It is not the case, then, that God … choose(s) to eternal life those who he foresees will believe. (page 381)

The question the reader must now ask, is how did Justin define foreknowledge? Did he understand this term the same way Millard Erickson, and other Calvinists, define it? There are numerous passages in Trypho that describe foreknowledge (for example chap 70, 82, 141). One of the most clear statements about how Justin understood this idea can be found in First Apology.

First he argues for people having the power of rational thought and the ability to choose what is right. Then explains that God foreknows these freely chosen decisions.

For among us the prince of the wicked spirits is called the serpent, and Satan, and the devil, as you can learn by looking into our writings. And that he would be sent into the fire with his host, and the men who follow him, and would be punished for an endless duration, Christ foretold. For the reason why God has delayed to do this, is His regard for the human race. For He foreknows that some are to be saved by repentance, some even that are perhaps not yet born. In the beginning He made the human race with the power of thought and of choosing the truth and doing right, so that all men are without excuse before God; for they have been born rational and contemplative. And if any one disbelieves that God cares for these things, he will thereby either insinuate that God does not exist, or he will assert that though He exists He delights in vice, or exists like a stone, and that neither virtue nor vice are anything, but only in the opinion of men these things are reckoned good or evil. And this is the greatest profanity and wickedness. (chapter 28)

Later he will, further explain that foreknowledge is not based on necessity, thus eliminating the notion that it is rooted in decrees.

So that what we say about future events being foretold, we do not say it as if they came about by a fatal necessity; but God foreknowing all that shall be done by all men, and it being His decree that the future actions of men shall all be recompensed according to their several value, He foretells by the Spirit of prophecy that He will bestow meet rewards according to the merit of the actions done, always urging the human race to effort and recollection, showing that He cares and provides for men. (chapter 44)

God foreknows the future actions of men and does not necessitate them. Rather what is decreed (or planned ahead of time) is how He plans to reward those who have faith (ie “merit of the actions done”). Calvinists will balk that “fatal necessity” is not how they understand the decrees. But, for Justin the argument is necessity vs. foreseen actions. Not a nuanced view of fate and decree.