This is post is part of a series of posts as I blog through the book Simply Jesus by N.T. Wright. Feel free to join in at anytime.

In 1991, the Perfect Storm (aka as the Halloween Nor’easter of 1991) hit the North East Coast of the US. It was the storm behind the popular movie of the same name. In chapters 3 – 5, Wright uses the image of the Perfect Storm to describe both the modern culture wars as well as the historical situation in Jerusalem during the first century.

The Perfect Storm: Studying Jesus
Three different weather circumstances collided to create the perfect storm, and Wright says three forces are colliding to form a perfect storm around the study of Jesus.

The third storm listed is also one of the 3 puzzles (Jesus’ world) that Wright offered as a key challenge to understanding Jesus. 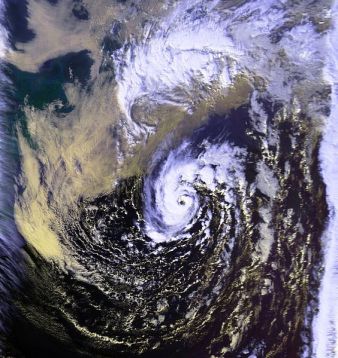 Wright describes the first two storms (skepticism and fundamentalism) using a series of questions and then exploring the myths that each tell. Myths are defined in Simply Jesus as the ‘stories that encapsulate the strongly held beliefs of each community’.

Rather than focus on Wright’s descriptions of these two storms, I want to focus on what Wright sees as the main problem.

The underlying problem with both these myths is that they pose the question in the wrong place. [They both ask], “Did it all happen or didn’t it?” … No frills, no metaphors, no interpretation, just “facts.” Did it happen of not? … Facts or no facts. But what about meaning?

Wright reminds us that it is possible that both camps have made mistakes using this approach and that both should allow more room for interpretation and nuance within the Gospel accounts that are guided by studying the historical Jesus.

The Perfect Storm: Jesus’ World
In describing the enormous challenges of studying history, Wright reminds us that we have limited information on the first century in which Jesus lived. However using the limited sources that we have, we must reconstruct the historical time period in which Jesus lived if we are to correctly understand the Gospels. If we fail to use these sources to reconstruct the historical context then

we will simply repeat the age-old mistake of imagining Jesus in our own image or at least placing him, by implication, in our own culture.

we assume, too readily, that people in Jesus’ day were eager to ask [the questions that we are asking] as well, meaning pretty much the same by them as we do now.

Wright goes on to list three storms that collided during the first century to create another perfect storm that surrounded the events of the Gospel accounts.

A New Exodus
The Jews had a story that was, what Wright calls, a “prospective eschatology, looking forward from within a decidedly ungolden age … for the freedom, justice, and peace” that God would restore for them. Wright captures that story in a nutshell:

God made the world, God called Israel to be his people, and God would remake his world in order to rescue his people Israel.

This story line forms the basis for the Five Act hermeneutic in Wright’s Scripture and the Authority of God. This story would be the storm that would challenge the power of Rome and its own storyline.

After the aftermath of a civil war, Julius Caesar’s adopted son Octavian becomes the Emperor (Caesar) and takes the title –  Imperator Caesar Divi Filius – Emperor Caesar, son of the divine.

If you’d asked anybody in the Roman Empire, from Germany to Egypt, from Spain to Syria, who the “son of god” might be, the obvious answer, the politically correct answer, would have been “Octavian”.

In contrast to Israel, the story of Rome was retold as a “retrospective eschatology, in which people looked back from a ‘golden age’ that had arrived. The good news is that the son of god had arrived to bring peace and security.

This message of course forms the basis of our hope – but that hope is in the Messiah Jesus and not the Emperor or the state.

The evidence now available, including that from epigraphy and archaeology, shows that the cult of Caesar was not simply one new religion among many in the Roman world. Already by Paul’s time it had become the dominant cult in a large part of the Empire, certainly in the parts where Paul was active, and was the means whereby the Romans managed to control and govern such huge areas as came under their sway. Who needs armies when they have worship?

He goes on to describe Paul’s missionary work:

[Paul’s] missionary work, …, must be conceived not simply in terms of a traveling evangelist offering people a new religious experience, but of an ambassador for a king-in-waiting, establishing cells of people loyal to this new king, and ordering their lives according to his story, his symbols, and his praxis, and their minds according to his truth. This could only be construed as deeply counter-imperial, as subversive to the whole edifice of the Roman Empire; …

I am still getting my head around the “Anti-Imperial Cult” hermeneutic. At this point, I think that it is important for us to understand and grapple with the fact that many terms and images used by the early Christian authors would have brought to mind things in the first century reader that we don’t think about. And that our current understanding of these terms and images may not be what the original author and audience would have thought about.

I also am in agree with Wright, writing in the article PGCE, that the term good news,calls us to an “allegiance to ‘another king'” and

that the word “gospel” carries two sets of resonances for Paul. On the one hand, the gospel Paul preached was the fulfilment of the message of Isaiah 40 and 52, the message of comfort for Israel and of hope for the whole world, because YHWH, the god of Israel, was returning to Zion to judge and redeem.

However, I don’t see the “coded messages” that Wright does (see the rest of the article) in the New Testament. I look forward to learning more, starting with reading this book, edited by Scot McKnight and Joseph Modica, in the near future – Jesus Is Lord, Caesar Is Not: Evaluating Empire in New Testament Studies.

We have all seen (and likely been guilty of as well) Scripture used out of context – from reading a text without focusing on the theme of the book or surrounding chapters, to using a text to prove a theological point that may not have been the point of the original author. That is why I appreciate Wright’s emphasis on dealing with the historical context of the Gospels to grapple with the tough questions that opened the book – who did Jesus think he was? and what did he think he was doing? Christianity is based on God’s working in history, therefore the call to understand the world of the original author and their audience is an important part of understanding Jesus and his message.