As we continue our Easter related posts, we are going to look at John of Damascus’ reflections on the cross in his work Orthodox Faith. An eighth century theologian, John is best known for defending the veneration of icons and imagery when this issue was causing major divisions (link). Though intermixed with a defense of venerating the symbol of the cross (mostly removed from this post), John’s writing shows how central the cross is to orthodox Christianity.

The rest of this post contains excerpts from Book 4 chapter 11 (CCEL).

Every action, therefore, and performance of miracles by Christ are most great and divine and marvellous: but the most marvellous of all is His precious Cross. END_OF_DOCUMENT_TOKEN_TO_BE_REPLACED

Around 150 years before Athanasius wrote On the Incarnation, Justin Martyr wrote Dialogue with Trypho. As a Christian philosopher, Justin explored the case for Christ through a conversation with a Jewish seeker named Trypho. As the conversation unfolds the need for the cross is affirmed.

The rest of this post contains excerpts from chapters 89-95 from CCEL.

Then Trypho remarked, “Be assured that all our nation waits for Christ; and we admit that all the Scriptures which you have quoted refer to Him. … But whether Christ should be so shamefully crucified, this we are in doubt about. For whosoever is crucified is said in the law to be accursed, so that I am exceedingly incredulous on this point. It is quite clear, indeed, that the Scriptures announce that Christ had to suffer; but we wish to learn if you can prove it to us whether it was by the suffering cursed in the law.” 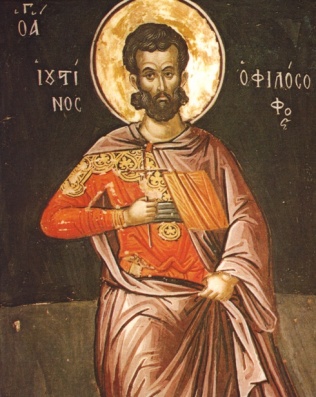 I replied to him, “If Christ was not to suffer, and the prophets had not foretold that He would be led to death on account of the sins of the people, and be dishonoured and scourged, and reckoned among the transgressors, and as a sheep be led to the slaughter, whose generation, the prophet says, no man can declare, then you would have good cause to wonder.

But if these are to be characteristic of Him and mark Him out to all, how is it possible for us to do anything else than believe in Him most confidently? And will not as many as have understood the writings of the prophets, whenever they hear merely that He was crucified, say that this is He and no other?” END_OF_DOCUMENT_TOKEN_TO_BE_REPLACED

As we approach Easter, it seemed fitting that we read some early views on the cross.  Who better to start with then Athanasius, a fourth century bishop of Alexandria. He was, after all, known for writing letters around Easter. The most famous is the 39th Festal Letter. Written in 367 it is widely considered the earliest list containing all 27 books of the New Testament (see this post for a possible earlier list). He was also at the Council of Nicea. Around 318, he wrote what may be his most famous work, On the Incarnation.

That opening chapter of the work clearly states it’s purpose:

You must understand why it is that the Word of the Father, so great and so high, has been made manifest in bodily form. … He has been manifested in a human body for this reason only, out of the love and goodness of His Father, for the salvation of us men.

Later in the work, Athanasius examines the question: why crucifixion?

The rest of this post contains portions of chapter 4.19-25 from CCEL.

Thus it happened that two opposite marvels took place at once: the death of all was consummated in the Lord’s body; yet, because the Word was in it, death and corruption were in the same act utterly abolished. Death there had to be, and death for all, so that the due of all might be paid. Wherefore, the Word, as I said, being Himself incapable of death, assumed a mortal body, that He might offer it as His own in place of all, and suffering for the sake of all through His union with it, might bring to nought Him that had the power of death, that is, the devil, and might deliver them who all their lifetime were enslaved by the fear of death. END_OF_DOCUMENT_TOKEN_TO_BE_REPLACED